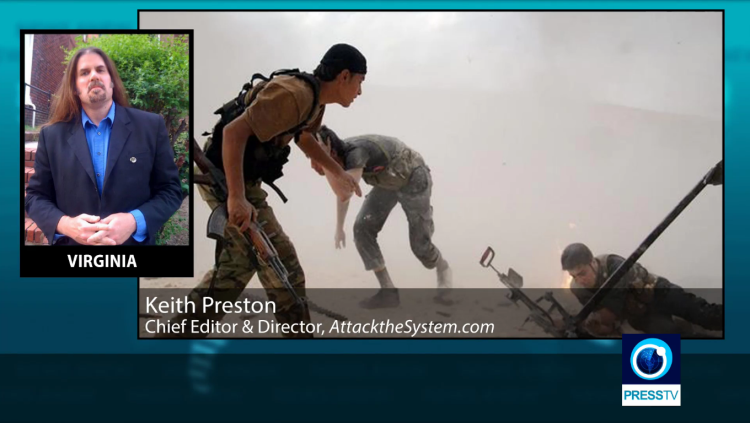 This August 9, 2015 US Air Force handout photo shows an F-16 Fighting Falcon departing Aviano Air Base, Italy en route to Incirlik Air Base, Turkey, in support of a US campaign allegedly against Daesh (AFP)
Click Image for Interview with Preston

The military and political strategies deployed by the US imply that the West is only after preserving “puppet states” through which it can have more dominance over the region.

Since the breakout of war in Syria and the expansion of turmoil in the region, the US has tried to back and fund militant groups that are pro-western and part of its so-called coalition partners, Keith Preston, the chief editor and director of attackthesystem.com, told Press TV Monday.

In Syria, where Washington claims to seek demise of the Daesh terrorists, it provided support for the militants fighting the government of Syrian President Bashar al-Assad.

With Russia launching airstrikes against Daesh in Syria, the militants have become “increasingly isolated” and the US finally resorted to air-dropping weapons for them.

“It has gone very poorly and many of the weapons have fallen into alternative hands,” Preston said.

US Central Command spokesman Colonel Patrick Ryder said in a statement on Monday that “the aircraft delivery on Sunday included small arms ammunition to resupply counter-ISIL ground forces so that they can continue operations against ISIL,”

US officials have told The Associated Press that Russia has directed parts of its military campaign against US-backed terrorists and other extremist groups in an effort to weaken them.

As stated by Preston, US is supporting fundamentalist terrorists and insurgent groups through the Persian Gulf states which are part of the western coalition allegedly against Daesh.

I am a Tlingit, born and raised in Tlingit Country, and a proud member of the Tlingit Nation.
View all posts by Vince »
« Cameroon Boko Haram Attacks: US Sends Troops To Nigeria’s Neighbor In Effort To Combat Militants
Mainstream Media Declares Clinton the Winner of Debate, Their Own Polls Say Otherwise »