Mainstream Media Declares Clinton the Winner of Debate, Their Own Polls Say Otherwise

Who won last nights Democratic Debate? If you’re reading mainstream media headlines, then you’ll see that the press has been quick to crown the heir apparent of the Clinton Dynasty. Digging a little deeper shows that the mainstream media’s own viewer polls say otherwise. Slate, CNN, Fox News, MSNBC and Time Magazine all ran headlines declaring Hillary Clinton the winner while also conducting live polls showing that their audience thought Bernie Sanders won the debate. Who is controlling the political narrative here?

Below are headlines and accompanying excerpts of articles praising Clinton’s performance, followed by screenshots of their online polls. You can follow links to most of the articles and polls to see for yourself.

It was a victorious comeback for Hillary Clinton, a front-runner who has been on the downswing.
The former secretary of state and first lady, who once came within a few cracks of shattering the glass ceiling to win a major party’s presidential nomination, stepped on to a debate stage once more Tuesday night. But this time, it was to ask the American people to allow her to succeed the very man who had crushed her White House dreams seven years ago.

Hillary Clinton proved without a doubt Tuesday night why she is the Democratic Party’s presidential front-runner.

Clinton remained unflappable throughout the debate, showcasing her political experience and her command of the issues — all the while deftly handling criticism of her flip-flops and displaying a humor that put a more human face to her oft-criticized candidacy.

From the outset, Clinton was pressed to defend her changing stances on various issues — from the Pacific Rim trade deal to same-sex marriage — and came out from the tough questioning with a strong one-liner that very much fits the frame of her campaign: “I’m a progressive. But I’m a progressive who likes to get things done.”

Vice President Joe Biden may have seen his 2016 window close Tuesday night as Hillary Clinton solidified her grip on the top spot in the Democratic field during a compelling first presidential debate here.

If anybody thought Biden was waiting for Clinton to show serious vulnerability, she easily eliminated that concern. With her experienced, commanding and occasionally pointed style, she moved aggressively against top rival Bernie Sanders out of the gate, and made a case for herself and her ideas with an effectiveness that no candidate on the stage could match. 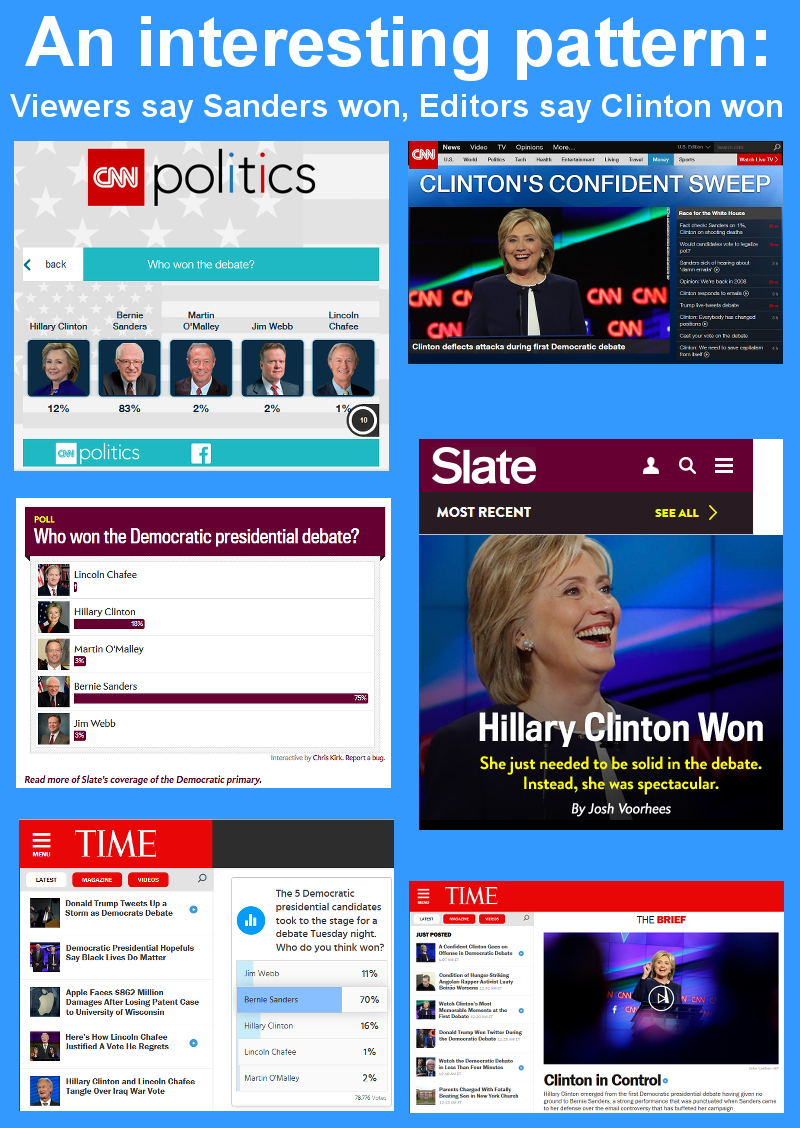 I am a Tlingit, born and raised in Tlingit Country, and a proud member of the Tlingit Nation.
View all posts by Vince »
« Keith Preston: US wants ‘puppet states’ in power in Middle East
Meme of the Day: The Republican Party is for Rich, Old White People! »