The Intercept has released a trove of leaked documents related to the United State’s use of unmanned aerial vehicles to kill foreign targets. The documents reveal a disturbing story of an assassination program that has been sold to the public as a viable alternative to an expanded ground war in the Middle East. Among those things revealed were missions flown on faulty intelligence, a higher cost of civilian life than ever reported by the government, and a systematic mechanism for Presidential approval of assassinations, rebranded as “targeted killings.”

The source of the leaked documents revealed his motives behind his actions:

This outrageous explosion of watchlisting — of monitoring people and racking and stacking them on lists, assigning them numbers, assigning them ‘baseball cards,’ assigning them death sentences without notice, on a worldwide battlefield — it was, from the very first instance, wrong.

We’re allowing this to happen. And by ‘we,’ I mean every American citizen who has access to this information now, but continues to do nothing about it.

The Intercept has obtained a cache of secret documents detailing the inner workings of the U.S. military’s assassination program in Afghanistan, Yemen, and Somalia. The documents, provided by a whistleblower, offer an unprecedented glimpse into Obama’s drone wars. 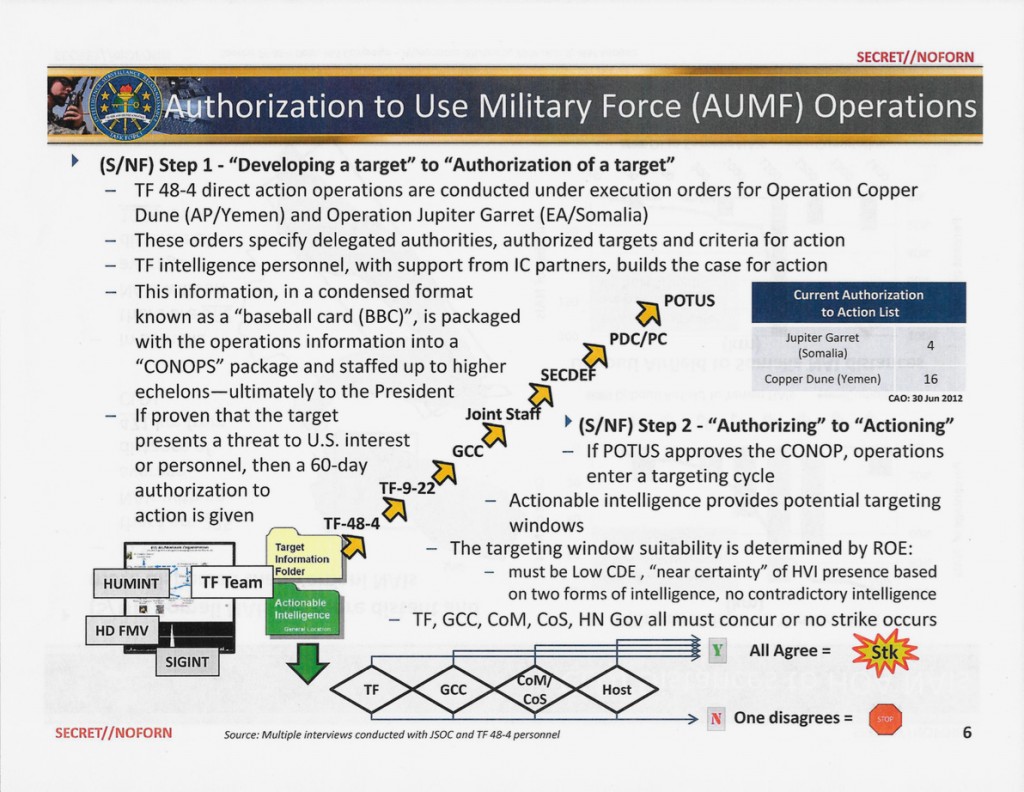 A slide from a May 2013 Pentagon presentation shows the chain of command for ordering drone strikes and other operations carried out by JSOC in Yemen and Somalia. GCC = Geographic Combatant Command; SECDEF = Secretary of Defense; PDC/PC = Principals’ Deputies Committee/Principals Committee; CoM = Chief of Mission; CoS = Chief of Station

I am a Tlingit, born and raised in Tlingit Country, and a proud member of the Tlingit Nation.
View all posts by Vince »
« Meme of the Day: It’s Voluntary Because You Can Leave
New Position at Department of Justice to Target Americans with Anti-Government Views »