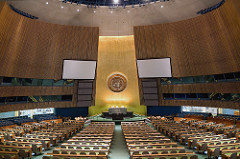 The report, carried out by the UN Secretariat, covers the period between July 2014 and June of this year. It does not name the staff involved, their nationalities, or where the offenses took place.

Perhaps most alarmingly, four UN employees were dismissed for receiving, storing, and disseminating pornographic images of minors on their official computers and over UN networks. It was unclear if their home countries had filed any charges against the four unnamed individuals. A fifth staff member who stored adult pornographic material on a UN computer was demoted and blocked from being promoted for a period of two years.

Related: Should Manga Be Included in Child Pornography Legislation?

Elsewhere in the report, a staffer was referenced as being fired for using “an official vehicle of the Organization to transport approximately 173 kilograms of marijuana.” Another employee inexplicably tried to bring a chainsaw on a UN passenger flight. Yet another UN security official was caught pilfering $2,200 from a passenger while screening their luggage.

I am a Tlingit, born and raised in Tlingit Country, and a proud member of the Tlingit Nation.
View all posts by Vince »
« French Monsanto research site damaged in suspected arson attack
Public School Indoctrination Embedded in Grammar Quiz »