Why is a long time political activist and Hillary Clinton backer smearing Donald Trump in the name of Bernie Sanders? Deport Racism, a political action committee, features a video of cursing children on it’s website. The target of the childish expletives is Republican presidential candidate Donald Trump. The accusation against Trump is racism against Latinos, Hispanics, Mexican Americans and people with brown skin. The website asks in a large link, “So which 2016 candidate’s not an asshole on immigration?” Where does the link go? It leads to FeelTheBern.org, a site campaigning for Democratic presidential candidate Bernie Sanders. 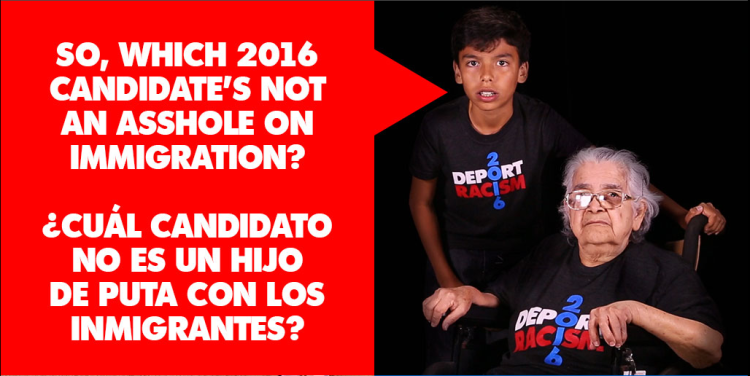 Here’s where things get weird. Deport Racism was registered by Luke Montgomery, a long time political activist who started “Bill for First Lady.com”, a humorous web campaign whose stated objective was to build support for a 2008 presidential run by Hillary Clinton. Maybe he has switched to the Sanders camp? Or maybe it’s easiest to launch false flag smear campaigns in the name of Sanders in order to deflect criticism from Hillary Clinton. If Hillary is the heir apparent of the Clinton dynasty, then implying that Sanders supporters are flinging mud is a simple way to attack Trump in anticipation of fighting him in the general election. Maybe Sanders takes the heat, and Clinton moves beyond the Democratic Primaries to take on Trump.

I am a Tlingit, born and raised in Tlingit Country, and a proud member of the Tlingit Nation.
View all posts by Vince »
« Alien megastructure: Brian Cox says Dyson Sphere around distant star ‘wouldn’t be horrendously surprising’
UFO Sighting Explained as Naval Missile Test »