US Patent Reveals: Your TV is Brainwashing You 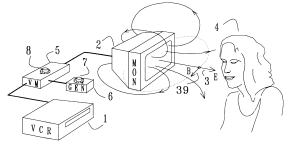 Nervous system manipulation by electromagnetic fields from monitors
US Patent: 6506148 B2

It has long been suspected that electromagnetic energy may be used for nefarious purposes, from weaponization to mind control. A US Patent reveals that the use of electromagnetic pulses from televisions is protected intellectual property. The patent, entitled “Nervous system manipulation by electromagnetic fields from monitors,” claims that TVs and monitors can be programmed to “emit pulsed electromagnetic fields of sufficient amplitudes” to cause physiological effects on the nervous system. To what ends would such technology be used? We can only guess. From the summary of the patent:

Computer monotors and TV monitors can be made to emit weak low-frequency electromagnetic fields merely by pulsing the intensity of displayed images. Experiments have shown that the ½ Hz sensory resonance can be excited in this manner in a subject near the monitor. The 2.4 Hz sensory resonance can also be excited in this fashion. Hence, a TV monitor or computer monitor can be used to manipulate the nervous system of nearby people.

The implementations of the invention are adapted to the source of video stream that drives the monitor, be it a computer program, a TV broadcast, a video tape or a digital video disc (DVD).

For a computer monitor, the image pulses can be produced by a suitable computer program. The pulse frequency may be controlled through keyboard input, so that the subject can tune to an individual sensory resonance frequency. The pulse amplitude can be controlled as well in this manner. A program written in Visual Basic(R) is particularly suitable for use on computers that run the Windows 95(R) or Windows 98(R) operating system. The structure of such a program is described. Production of periodic pulses requires an accurate timing procedure. Such a procedure is constructed from the GetTimeCount function available in the Application Program Interface (API) of the Windows operating system, together with an extrapolation procedure that improves the timing accuracy.

I am a Tlingit, born and raised in Tlingit Country, and a proud member of the Tlingit Nation.
View all posts by Vince »
« “Snowden’s a Hero, Drug War’s a Failure, Guns Aren’t for Hunting” Vince Vaughn Tells it Like it Is!
Activist Predicts Death, Says The Cops Killed Him »